Read this story Pariksha (The Test) by Premchand. It is not a great story, in fact a very ordinary one, but it is among his very popular ones and has found a place in many school anthologies. It is typical of Premchand, combining  his genial satiric humour and a moral. The moral here is: Who is a good administrator? And it is difficult  to fine one. One may or may not agree with him. 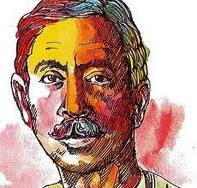 When Sardar Sujan Singh, Diwan of the State of Devgarh, reached old age he remembered God. He went to the Maharaja and supplicated, ‘O, friend of the oppressed, this slave has served you for forty years. Now I seek your permission to serve God for some time; moreover   I’m far advanced in years and have no energy left to handle the administration of the state. I don’t want to sully my name by some unintended mistake and ruin my reputation earned through a life-long service.’

Raja Sahib had great respect for his very experienced and accomplished Diwan. He tried to persuade him to continue but when Diwan Sahib did not budge, he acceded to his request but on the condition that he himself will have to select the new Diwan.

The next day the important newspapers of the country carried this advertisement for appointment to the office of Diwan for the state: Anyone who considers himself suitable for appointment to this office should present himself  before the present Diwan, Sardar Sujan Singh. He need not be a graduate, but should be strongly built. Those suffering from weak stomachs need not take the trouble to come. All the aspirants would be treated as guests and kept under observation for one month for their behaviour and conduct. More than education, commitment to duty would be rewarded. One who came up to these expectations would be appointed to this high office.

2
The advertisement created a furor in the country. Such an exalted office, and no qualifications! It all seemed a matter of chance. Hundreds set out to try their luck. In Devagarh one could see newest varieties of people. From every train a motley crowd of visitors deboarded. Some came from Madras, others from Punjab. Some displaying the latest fashions,others showing off their simplicity. Pandits and maulvis also saw an opportunity to test their fortunes. Poor fellows had always rued the lack of degrees, but here there was no need for them. Colourful cloaks, and chogas, and all varieties of men's wear and head-gear were now on display in Devgarh. However, the largest number were degree holders, for even if it was not  a precondition  a degree did act as a fig leaf.

Sardar Sujan Singh had made very good arrangements to accommodate and entertain the guests. Lodged in their rooms, the candidates counted each day like  Musalmans do during Ramazan. Every visitor tried to showcase his life in the best manner possible.  Mr A, who used to get up at nine, was seen strolling in the park before sunrise. Mr B, who was addicted to the hookah, now smoked cigars behind closed doors. Some others, who at home treated their servants like slaves, talked to the servants here with unusual courtesy and politeness. Mr. K, who was an atheist, follower of Huxley,  had become so religious that even the temple priests might have felt threatened with dismissal. Yet another, Mr. L, who hated books,  was these days lost in browsing  through great big books. Whosoever you  talked to, seemed a model of gentleness and good conduct. Sharmaji spent his time reciting mantras from the Vedas  and maulvi sahib had nothing else to do except saying the namaaz and  reciting the Quran. Each one thought it was just a one-month botheration, and once he had succeeded who would care.

But that discerning old jeweller was unobtrusively observing everyone, trying to spot the swan among the cranes.

3
One day the fashionable group proposed playing a hockey match. This proposal was made by some seasoned players of the game. After all this too was an art, why not show it off? Who knows this might help. So the decision was taken, the teams formed and the match began. The ball began to be pushed and thrashed like some office equipment.

This game was altogether new for Devgarh. The literate and the respectable people played thoughtful games like chess and cards. Games involving running and jumping were believed to be children’s games.

The match was turning out to be a spirited contest. When the attacking side rushed forward with the ball they looked like a wave surging forward, but the defending side stood like a  wall of steel to check its advance.

It went on till the evening. The players were drenched in sweat, their faces red with heat. They were gasping for breath, and the match ended in a draw.

It was dark now. There was a nala close to the playground. There was no bridge across the nala and the wayfarers had to wade through it to go to the other side. The match had just ended and the players were resting to get their breath back. Just then a farmer came to the nala with a cart-full of grain. Partly because the track was muddy and partly because the climb was steep, he  was unable to drive the cart up through the nala. He yelled at the bullocks; he tried to push the wheels up with his hands, but, the cart was overloaded and the bullocks not  strong enough. The cart wouldn’t go up, and if it did it slid back again. The farmer tried to push the cart up again and again, whipped the bullocks out of frustration but the cart refused to go up the slope. The poor fellow looked here and there but found no help. He could not leave the cart unattended and go somewhere to seek help. He was in great trouble. At that very moment the players happened to pass by carrying their sticks. The farmer looked at them with pleading eyes but didn’t have the courage to ask for help. The players also looked at him but with their eyes closed, eyes that reflected no sympathy, that were selfish and drunk with pride, showing no sign of generosity or compassion.

4
But among the players there was one person who had both sympathy and courage. Today he had hurt his foot during the match and was slowly limping along. Suddenly his eyes fell on the cart and he stopped. The moment he looked at the farmer he understood the situation. He kept his stick on one side, removed his coat and said to the farmer, ‘Should I help you push up your cart?’

The farmer saw in front of him a tall well-built man. ‘Hazoor, I dare not ask you.’  The young man said. ‘It seems you have been stranded here for a long time. Now go and sit on the cart and drive the bullocks while I push the wheels up.’

The farmer went and sat in the cart. The young man pushed the cart up. The whole place was muddy and he was driven into the mud up to his knees. Yet he didn’t give up. He pushed the cart again. The farmer shouted at his bullocks. The bullocks got support, regained their  nerve and with a last effort they pulled the cart out of the nala.

The farmer stood before the youth with folded hands and said, ‘Maharaj, you have done a great favour to me. Otherwise I would have had to spend the whole night here.’

The young man said jokingly, ‘Now, would you give me some reward?’

The farmer said, ‘God willing, you will be the Diwan.’

The young man looked at the farmer. He wondered whether the farmer was not Sujan Singh himself. He had the same voice, the same face. The farmer too looked at the youth with a quick eye. Perhaps he too sensed what the young man was thinking. He smiled and said, ‘One finds pearls only by diving into deep waters.’

5
The period of one month was over. The day of reckoning arrived. All the candidates were anxious to know what destiny had in store for them. The wait looked like crossing a mountain. Hope and dejection crossed their faces like shadows. No one knew who was to be the lucky one, goddess Lakshmi’s favourite.

In the evening the Raja sahib held his court. The city’s rich and famous, the officers of the state, the courtiers, and the candidates for the office of the Diwan – all were assembled in the court dressed in their best. The candidates’ hearts were beating fast.

Sujan Singh got up and said, ‘You aspirants for the position of the Diwan, forgive me for any trouble I might have caused you. For this office I  needed a person who was full of compassion and generosity; someone who had great determination to face any difficulty. Fortunately the state has discovered such a person. People who possess such qualities are few in this world and are already holding high offices, so we cannot approach them. I congratulate the state to have  pandit Jankinath  as the new Diwan.

The officers and the wealthy of the state looked at Jankinath with appreciation, the candidates with envy.

Sardar Sahib spoke again, ‘I believe you will not hesitate to accept that a person who, in spite of being injured, should help a poor farmer drag his cart out of mud must be compassionate and strong-willed. Such a person would never oppress the poor. His determination will keep his heart steady. He may be deceived but would not budge from the path of duty.’
---
(Hindi, 'Pratap', October 1914, the first story published in Hindi)

Posted by tcghai at 7:51 PM 2 comments: Links to this post