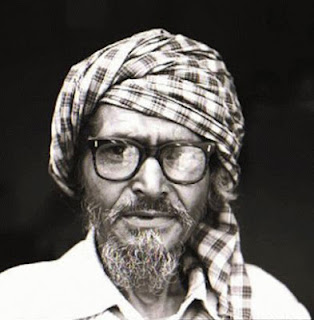 Photo by Amarjit Chandan
A POEM BY LAL SINGH DIL
The poem posted here is a translation (at present a tentative one) of Lal Singh Dil’s  Sutlej di Hawa, the first poem in his first collection of poetry published in 1971under the same name, and written in the first flush of the Naxalite movement in Punjab. The movement was a failure, but the issues raised by the movement remained unresolved, and now the Naxalite movement in its new avatar has come back to haunt the Indian state and people with far greater force.
This poem, a trifle sentimental, is a delicate mix  of  the revolutionary urge and a feeling for the Lahore martyrs, Bhagat Singh and his associates, Rajguru and Sukhdev; and of sadness and romance intertwined with a revolutionary hope that reminds one of Faiz (though without his marvelous sophistication and classic control).
I don’t know how the erstwhile Naxalites who were part of the movement in Punjab would now react to the poem about a movement that failed to sustain itself and left its scars. But it still sounds an authentic youthful voice full of a hope resting on wobbly foundations, which is often the case with movements in which the young in every generation invest their life and blood, tragically.
It is here for your perusal, comments.
THE BREEZE FROM SUTLEJ
(Sutlej Di Hawa)
I
When I saw you wafting through
The reed-grass fields
I fell in love  with you
I found you in my breath, and in my arms.
The stink exhaled from the Raj  Bhawans
Could not touch your pure soul
Because you rise from the currents
That enclosed in their wounded heart
The martyrs hanged in Lahore.
Here, each morn
Each night, each day, each evening
Is mournful.
Songs arise here
And  the grazier boys
Riding  upon their cattle’s backs
Wade through the  waters.
I see you lost in sadness
Your wafting currents
Become my sails
Towards islands of hope
I saw you in the trees
In the sadness of the wheat fields
In the fragrance of Kikar trees.
You can see
Right up to Kaveri
Lands being grabbed
The wheat crops being insulted
The smiling paddy being burnt
You can see
Extending far and wide the Raj Bhawans
That still hold the white man’s noose.
II
This sadness of yours won my heart
And I saw you in the shape of a beloved
I came away
Leaving the delicate valley of letters
In your hands.
One day the people fragrant with toil
Came to me
Riding on bullock carts
Those beautiful men
To discuss the complexities of politics
And then
One day when the sun rose
Your colourless smile
Turned  red all over.
You said:
‘Think of me as a flame.’
I shall never lose heart
Even if the darkness thickens.
Your smiles
My words
Have become the light
Of my soul
I remember the day
When you  danced
Upon my shoulders
Even today I feel
As if there’s a gun upon my shoulders
My eyes are intoxicated and
All the trees appear like warriors
Riding their horses
Their heads camouflaged with leaves
No, I’m not sad
Burma and France are astir
Slogans echo in the enemy camp
The land of India speaks out
Only one voice is heard from the jungles:
Forget love. Come and see
How the enemy goes up in flames.
---
Also see my previous posts for more on Lal Singh Dil.
Posted by tcghai at 11:17 AM